Applications of Blockchain Technology in Fintech

Fintech industry is disrupting numerous markets. Yet, blockchain remains one of the most buzzed terms for the industry for the past three years in a row.

Governments and governmental institutions worldwide, speakers at World Economic Forum, traders on Wall Street and even diamond miners in South Africa have already expressed their interest in using this technology.

So what’s causing the stir exactly?

Blockchain is largely regarded as the technology powering up the bitcoin virtual currency. However, blockchain market applications have gone way beyond the cryptocurrencies. 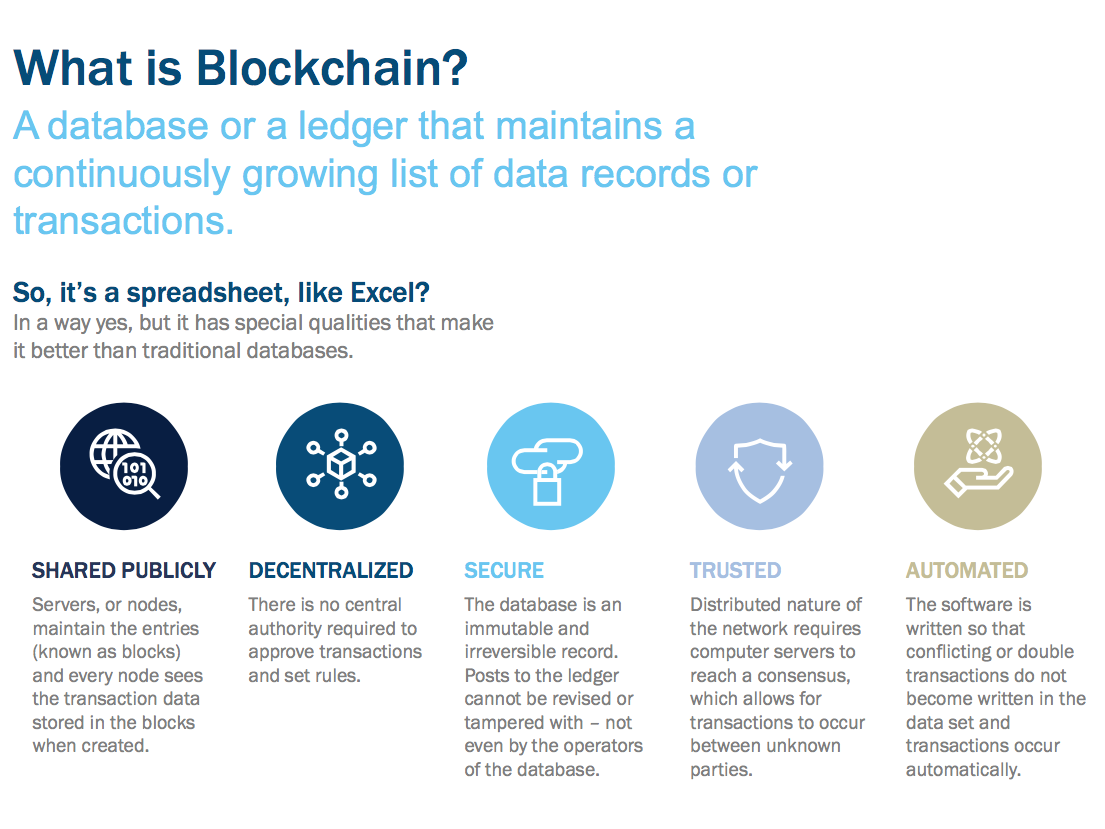 Lee Braine, a computer science Ph.D. in the CTO’s office at Barclays, proposes a one-sentence definition of blockchain:

“It’s a way of chunking transactions into a batch, called a block, and then a way of hashing them with the previous block to ensure immutability.”

A “Hash” is your unique digital identifier created for a transaction and a shortcut generated when the transmitted data is processed through a cryptographic tool before it’s being added to the previous block.

In a nutshell, blockchain is a new way of transmitting and encrypting any kind of transactions on the web without having a centralized authority to validate the action. Transmission happens through peer-to-peer servers (nodes) instead.

Practical applications of blockchain technology can go beyond the financial industry. This technology could be used to encrypt all sorts of online transactions e.g. voting, auction bids, transmitting data between IoT devices, authenticating academic certificates and even ride sharing.

However, blockchain technology and applications for FinTech in particular has gained the most spotlight among financial institutions, startups, and venture capitalists and remains among the top fintech trends for 2017.

Use Cases of Blockchain Technology in Fintech

Before we move on to the blockchain applications in the financial industry, let’s quickly sum up its universal benefits:

Paramount security should go without saying, but we’d like to additionally imply that compromising a blockchain transaction is impossible.

If one of the elements is corrupted in some way, the transaction will not take place. 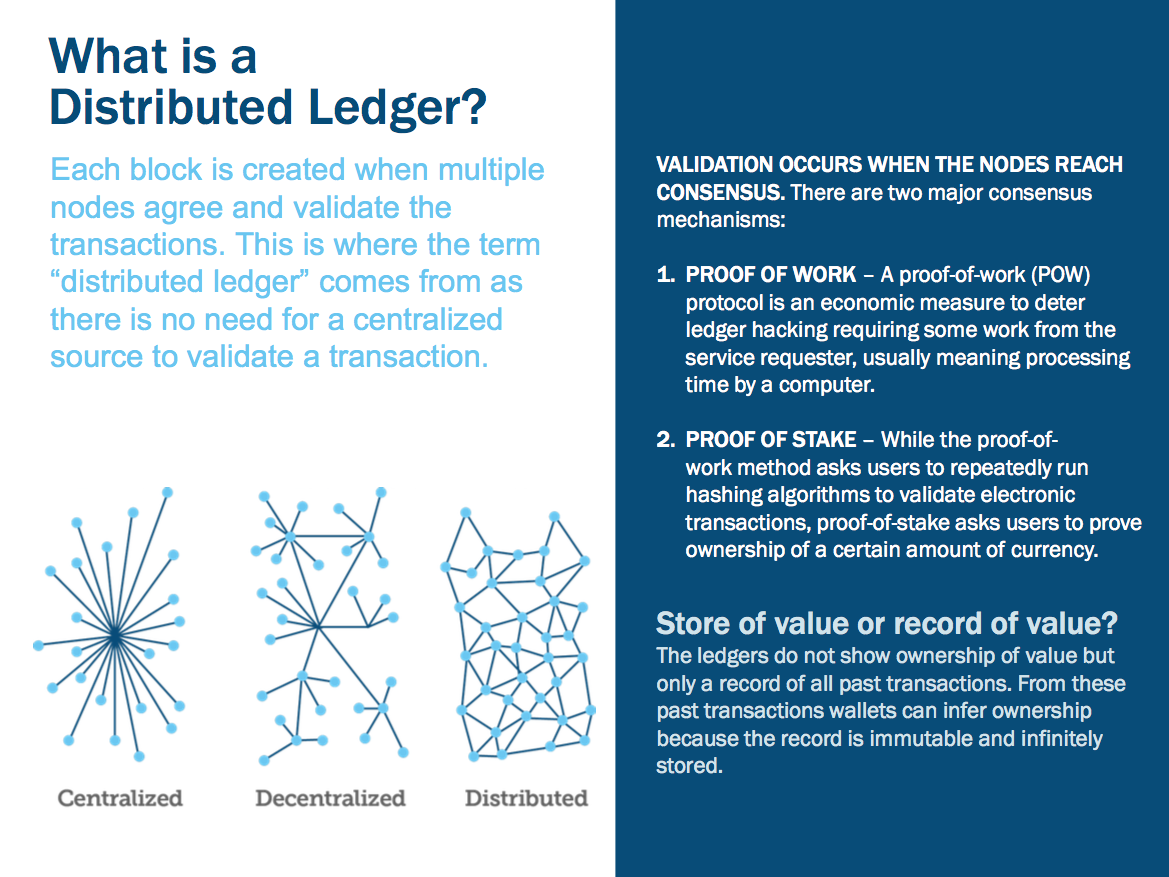 Transparency. No blockchain transaction can be tampered or deleted post-execution. All changes to public blockchains can be publicly viewable.

User empowerment. Every usage party is directly in control of all their information and transaction history.

Finally, blockchain drastically reduces the transaction & operational costs for banks. According to the latest research from Accenture, deploying blockchain for automating certain financial processes can help banks save $12 billion this year.

From the consumers perspective using blockchain for sending international payments can significantly reduce the standard bank processing fees imposed by the correspondent banks.

As the legal implications of using bitcoin and blockchain have become less murky, more FIs and VCs have become interested in this niche.

Investment in blockchain and bitcoin startups in Q1 2016 has exceeded $1.1 billion with a large fraction of dollars going straight to companies exploring the usage of blockchain beyond the cryptocurrencies. 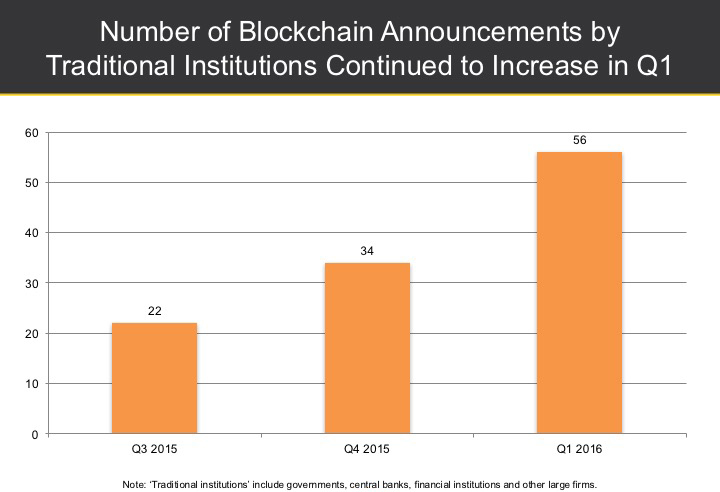 Before digging a bit deeper into the matter, let’s establish some additional clarity in terms first: 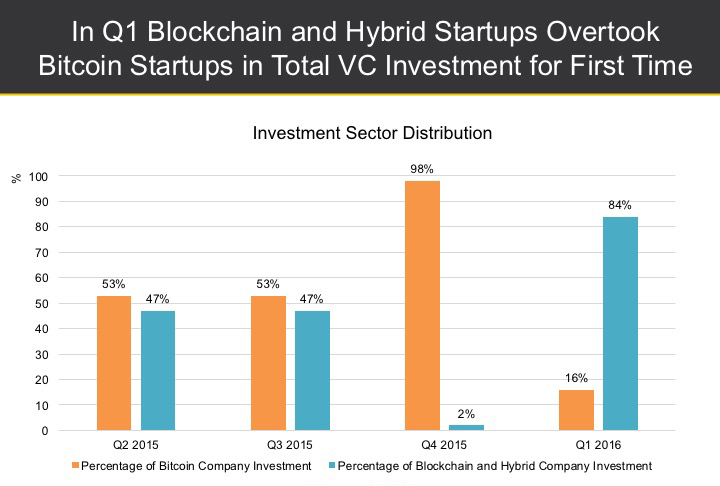 While Bitcoin currency still remains the largest application example of blockchain, a lot of startups are now moving away from merely helping users to cash out on bitcoin fluctuation rates, to more advanced business models.

A popular bitcoin app Circle was the first to leave the bitcoin-centered business model and shift towards offering affordable cross-border P2P payments to users.

Gartner research group has a similar sentiment towards the rise of the blockchain and the slow demise of bitcoin. Their latest Hype Circle for Emerging Technologies report has placed blockchain on the top of the expectations curve, additionally commenting that the decision to place blockchain that high is because it represents more than just financial services but a whole host of industries: 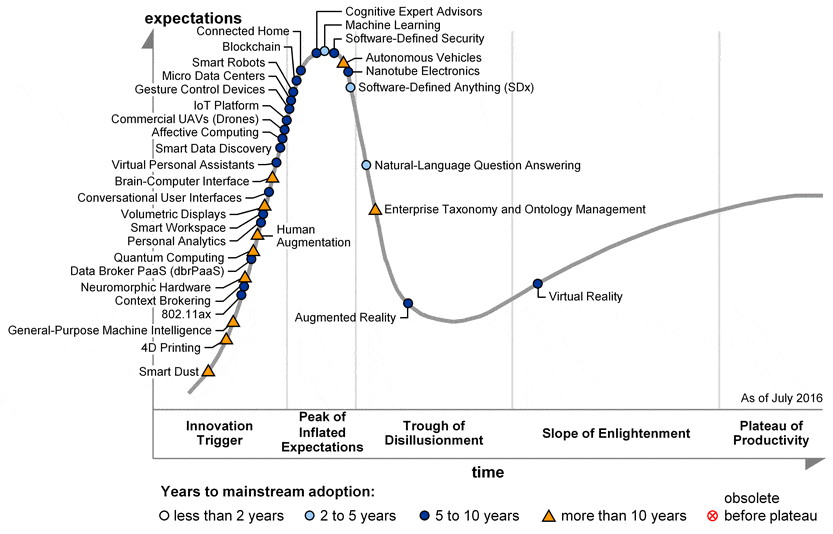 Bitcoin and cryptocurrencies were placed in the “trough of disillusionment” tab in 2015 and did not appear in last year report at all.

So what are the applications of blockchain technology outside the bitcoin ecosystem?

Blockchain could eliminate a lot of friction and stock tampering happening at the Wall Street.

Foremost, reduce the costs and time of stock purchases as right now when a stock is traded, it has to pass through brokers, exchanges, and needs to be “settled”. Of course, everyone receives the cut from the operation and the processing time may take days, especially when trading occurs over the weekends.

Additionally, blockchain will allow eliminating a lot of gray tactics used by traders such as “naked short selling” and in general, adding more transparency to the operational process.

One of the largest US online retailers, Overstock decided to focus on building the crypto-capitalism future. In summer 2016, the company unveiled their new blockchain-based private and public equities trading platform tØ, which allows instant and secure share trading online.

Unlike Nasdaq stock exchange company, which has experimented with blockchain-powered trading as well in partnership with Chain, tØ founders initially confirmed that their company does not plan to use bitcoin blockchain for issuing stocks.

Openbazaar startup has embarked on a new mission to introduce a fee-free online marketplace similar to eBay, which is powered by blockchain.

They promote an active exchange of goods and services between two parties without relying on a risky centralized authority and hence, enabling more people to start their e-commerce business without paying for additional e-commerce tools.

The company founders stated their “listing agnostic” position and promised not to enforce strict moderation rules to what could be exchanged within the community. However, they promise not to promote the service to those, who might be tempted to use it for illegal activities such as gun trade.

The company also plans to expand the scope of services to smart contract and P2P lending in the future. Again, no central arbiter will be in place to overlook those.  Instead, Openbazaar aims to create a P2P arbitration process within the community, which would allow users to establish authority figures, who in turn would help to certify the transactions and to resolve disputes between users.

Almost 25% of the global remittance market is still controlled by the large players like the Western Union and MoneyGram, processing over $500 billion in remittances per year.

However, the fees for sending micro-payments, particularly popular in the developing countries like The Philippines and Nigeria, are inhibitive. For instance, the majority of Asian workers send a quarter of their personal income ($200 on average) to their relatives. Those $12 in fees paid for the transfer often equal to their half day’s wage.

A number of blockchain fintech startups have emerged to cater P2P micro-payments. Sentbe offers a 60% less expensive service for sending money abroad and offers cash pickup locations as an alternative to card/bank transfers – a good selling point for attracting the unbanked population to their service.

Abra is a similar app aimed at US-consumers, which also allows conducting free P2P money transfers and receiving payouts either to your bank account or in cash by using only a person’s phone number.

Unlike other popular mobile payment apps like Venmo or PayPal, Abra allows users to hold digital cash on their smartphones without any 3rd party getting a grip of their money. Again, that was made possible by using bitcoin blockchain technology, which fixes the value of digital cash in real time without any centralized financial intermediary.

Of course, this isn’t the ultimate blockchain application guide. There is a number of other niches blockchain fintech is penetrating. Let’s Talk Payments has created a great infographic to illustrate those:

Ukrainian IT vendors are actively exploring the new opportunities presented by the blockchain technology as well, especially after obtaining active support from the government and the biggest national banks.

In November 2016, Ukrainian central bank has officially unveiled a new roadmap for deploying blockchain as part of the larger Cashless Economy scheme. While the central bank is interested in becoming an emitter of electronic money, the officials clarified that they are not looking to produce the next big thing after bitcoin, but rather create a digital form of the national currency, hryvnia. Introducing blockchain is primarily aimed at making money acquisitions cheaper and offering another possible alternative to card payments.

The main idea was to create a more transparent auction scheme and reduce the corruption levels within the governmental asset management domain. Using blockchain, in this case, means that any human influence on the auction will be made impossible. After the property enters the action, the bidding and selling process cannot be compromised in any way.

A group of volunteer blockchain developers is now working on a blockchain-based open democracy project e-Vox that would transform the voting process in the country. This Ethereum-based platform is planned to be published as an Open Source software and would provide voting functionality for organizing e-elections for any position within the government, managing e-petitions and e-referendums and serving any other applicable community purposes.

One of coolest bitcoin innovations in Ukraine was introduced by Hotmine startup – a smart home bitcoin mining device, which also pleasantly heats up the owner’s house ☺

Bitcoin use in Ukraine was also largely promoted by BTCU – one of the largest local bitcoin merchants, which installed over 5.000 24/7 bitcoin terminals across the country.

The bottom line is: Ukraine has an active community of blockchain developers and a rising interest in the domain from the local businesses.

Outsourcing blockchain development in Ukraine means that you could take an advantage of the local expertise and a burgeoning ecosystem emerging around this technology.
Bitcoin Foundation Ukraine is hosting regular conferences and actively fosters networking within the community of blockchain developers.

While it’s hard to measure the exact size of the Ukrainian community of blockchain developers, according to Forklog, it’s coming close second to the UK community.

Romexsoft would be delighted to consult you on all the aspects of blockchain development and the benefits of deploying it within your fintech product!

Michael Hello everyone! I’m Michael, Managing partner and COO at Romexsoft. I love to track latest software development trends, especially in fintech community. So if you have any questions or need a piece of advice in fintech, feel free to contact me!
Share The Post
Categories
Popular
Recent

An overview of Serverless services on AWS

How to Build a Perfectly Secure Fintech Application